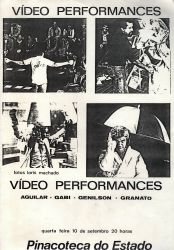 The date mentioned is the beginning of the Video Performances Program. http://pinacoteca.org.br/programacao/arte-como-registro-registro-como-arte/

In September 1980, Pinacoteca do Estado de São Paulo gathered four of us, José Roberto Aguilar, Ivald Granato, Genison Soares, and myself, for its Video Performances program. In order to prepare for my participation, I went to the bank to settle accounts and try to get some money to cover my presentation. Sitting at the desk of an attendant, I heard: "But you don't have an average balance for a loan!" I tried to argue and I heard explanations that I did not understand, even if I tried to counter-argue.

I imagined reconstituting the discussion mixing in the confused noises of stilleto heels on a wooden floor, typewriters, whispered conversations, others in loud voice..., I then built a huge  rattle, one of

those instruments with which the biscuit peddlers draw attention of passersby. (“Matraca”, rattle in Portuguese, is also said to mock a loud chatterbox). I gathered various party whistles, separated by types in boxes, and invited Aguilar to act as a partner. The gigantic matraca was on the floor and he was on one side, with a T-shirt with MANAGER stamped on it, and myself on the other side, with a T-shirt saying PEOPLE IN GENERAL. And the rattle was hurled back and forth by us two, with a deafening noise at each throw. In the meantime, the party whistles were distributed in the audience, in lots as per each group in the public. A deafening pandemonium was thus installed in the competition for the noisiest group.

It should be duly noted that in that instance none of us was dedicated to anything even remotely linked to the name of the program, Video Performances.