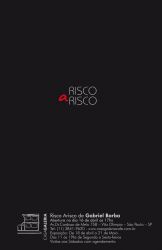 (Translating, I realized it should be called Risky Risk rather than Shy Dash or anything else, since Risco may be Dash or Risk. It would be a great title)

A sequence of dashes (scratches) some with cotton thread (again risk) others with the minimum. The risk of less.

An artist should be assessed by what he doesn't do.  John Lanchester.

Tout les silence n'est fait que des paroles qu'on n'a pas dit. (All silence is not but the words we did not say) Marguerite Yourcenar.

Simples ou nada, (Simple or nothing.) Myself.

Such things, also my readings of Angelus Silesius led me to the Risco Arisco (Risky Risk) collection presented in 2011 at Casa Galeria