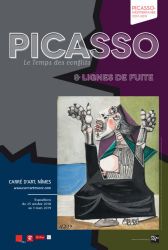 Jan-Marc Prevost's project aimed to take a look at "Picasso's creations during periods of political turmoil from World War II to the remarkable painting in 1951, the Korean Massacre."

He also proposes a dialogue between Picasso and the work of contemporary artists. Guernica is evoked by an unpublished set of drawings by Brazilian artist Gabriel Borba Filho and the route ends with the video installation by Rinek Dijkstra I See a Woman Crying
(...)

Three photographs by Dora Maar show the realization of the painting. Taken from the documentary chronicle of Picasso's work that Christian Zervos commissioned from Dora Marr and published in 1937 in Cahiers d'Art magazine.
This presentation will seem somewhat reduced from the one in which the
Picasso-Paris museum exhibited this exceptional set of photo prints..
(...)

To these documents was added a short film by Alain Resnais and Robert Hessens in 1950. After a brief introduction to the Guernica bombing, Maria Casales reads a text by Paul Elouard on Guernica's atrocities and 2000 innocent deaths.
(...)

This evocation of Picasso's painting is accompanied by five drawings by Brazilian artist Gabriel Borba Filho. For the 1977 Paris Biennale, Borba Filho envisioned a set of furniture, sun loungers and hammocks to accommodate Guernica's suffering figure.

The subtlety of Borba Filho's trait is unfortunately blurred by some mirror effect reflected by the plexiglass that protects him ...

note: Pequeno Mobiliário Brasileiro (Small Brazilian Furniture) has been presented in blueprint as of use in architectural and design projects. The originals are handled in the PM8 Gallery whose director and curator Francisco Salas lent them to Carré d'Art for this exhibition.

Its conductive intention is usually brought to the surface now a days. The Burial in the Net (note the net there) on drawing 1, taken from the painting of Portinari; Portinari's Dead Child, Picasso Study, and Poussin's Massacre of the Innocents (my 3 Ps on drawing 2) represented more than the sadness of grief: the despair of powerlessness. To reduce personal agony to the discomfort  with circumstantial oppression is to point out only one part of the fact. And in the opposite direction. Point out the cause not the thing itself.

Taking the sequence of drawings as a narrative, the plot goes through the Dead Warrior, who is the hero of a cause, and returns to the suffering women lighting up the scene. It is the imposed suffering here, not the imposer that is everywhere and always will.