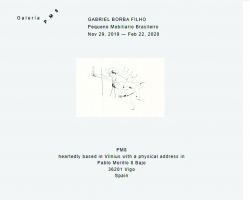 Presented in its time in blueprint, as usual in design and architecture projects, it will have in this exhibition its originals in tracing paper as presented in Nimes, and at this time accompanied by studies that preceded it and two prototypes elaborated by PM8 Gallery that enrich and clarify the procedure adopted in the transformation of visual structures into physical structures, scope of this project, as seen on PM8 Gallery installation.

Gabriel Borba wanted with this project to create 5 structures specifically made for some of the figures featured in El Guernica by Pablo Picasso, a project which helped him to think about how to transform a visual structure into a physical one. Therefore the chairs of Pequeno Mobiliario Brasileiro became the materialized recipients for these distressed and wounded characters which inhabit the famous painting by Picasso.

Pequeno Mobiliario Brasileiro was the continuation of an early research which started during Gabriel Borba´s university days and which was first formalized in 1969-70 in some structures created for his exhibition thesis.

The artist made 5 panels, in which he drew [following different levels of representation] the complete creative process of these 5 chairs or structures until its final result. In the first stage of each panel a character from the Guernica painting appears reproduced. Below the initial drawing we usually see different drawings made after other historical artists who might also have influenced Piccasso such as Poussin. There is also an important reference to Brazilian artist Cândido Portinari [a well known artist in Brasil in the 40´s and 50´s of the XXth Century and which was also known for been the representative of popular regional culture. One of his paintings is reproduced in the first panel, the image depicts a dramatic burial]. Then in what it might be regarded as the third level we see the Picasso´s figure [in Gabriel´s way] seated or placed in a chair or structure, and finally we reach the technical drawings which is the final design of the chair. Each panel has the structure of an architectural project, Gabriel is an architect and his artistic practice have also been informed by his own architectural studies.

In the exhibition there are on display, the original panels presented at La Biennale de Paris in 1977 with some of the prototypes of these chairs [specifically produced for this show] which have never been shown ever before [In fact it was more an intellectual experimental exercise than a functional one]. These newly built prototypes will be presented along with other original documentation of this important historical and political work from 1977.

Gabriel has always been very impressed by El Guernica, the painting was a perfect icon of human sufferance and pain caused by war and political conflicts. His interest increased by the time when he went back to his country [after studying in EEUU, Italy and France] where he found and faced a repressive dictatorial regime. What is fascinating about Pequeno Mobiliario Brasileiro, is that it is not only its formal drift into these meaningful and special objects but how an important historical and political work becomes a new source for creation and research under a context of deprived liberty.

Pequeno Mobiliario Brasileiro was mentioned in a review written by Austrian critic Otto Hahn in the french magazine L´Express Magazine.

One of the many studies from the sketches of Picasso to Guernica, in the elaboration of the figures of the Small Brazilian Furniture.
Gabriel Borba, 2019