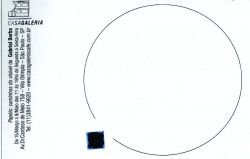 Papers: paths to the visible

Between 2008 and 2009, I was interested, as before, in reading Haykais. I dismissed, this time, the effort to approach kanji , and I read in English, enchanted by a "... magical moment when words took on meaning beyond meaning," in the words of Jackie Hardy in Haiku Poetry, Ancient and Modern.

I repeated the experiment with strokes without neglecting titles.

Given the delicate visibility of most of these drawings, chosen with others from the same company, curator Carmen Aranha called the set Papeis: caminhos do visivel (Papers: Paths of the Visible).

Under the guidance of curators Carmem Aranha and Loly Demercian at the Exhibition at Casa Galeria, it was proposed a workshop with Paulo Caruso and me, focusing on the difference and similarity between visual and graphic arts.

Limiar do Visível (Threshold of the visible)