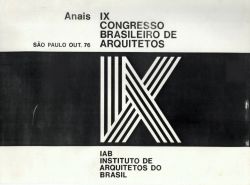 In August of 1976 I enrolled in the National Architecture Exhibition of the IX Brazilian Congress of Architecture and Urbanism, in São Paulo, and presented the project Jaula da Anta (Anta’s Cage), in blueprint from a drawing on tracing paper.

To the drawing seen here was added a side banner with the title of the exhibition and the congress (obligatory) and, by my account, a "describing report" saying:

"There are two architectures

and another simple and close.

That one of the nation, of the continent,

This one, of the Anta (tapir),

the rest is nothing but cement

(in Portuguese this last sentence can also be read as

The rest is forgetfulness)”

As in Aesop, the allegory of the figures chosen to compose the project induces meanings beyond their appearances. Rope, feather and anta (tapir) are figures of popular sayng that, once used in the same sentence, can project a significant universe. Try it: "You are an Anta ( so dumb). Too bad (uma pena= a feather) you stretched the rope until it cracked"

The easel, support of things, as I have draw it, let you read the name ANTA. It is connected to the video ME, in which the subject is replaced by an abstraction of itself. And also, with some effort, it's similar to the mirror scene in Nós Version II.

PM8:It springs to mind the work of Jaula da anta, 1970, a project which was rather polemic at the time and which provoked people so that you were expelled from the Colegio de arquitetos de SP and then you were back again in the same day, why were you expelled the first time and what made the members of the committee want you back again?

GB:The thing is: let’s say I was being seen as a naughty boy doing preposterous things and the project I presented to a International Congress of Architects, with no selection, was taken as provocation because of the theme, of the memorial and of the place. By chance, and as I said there was no selection, my project was hanged between two of those popes of Brazilian architecture and the people became bothered with. At the auditorium, during the debates, someone said that it was an absurd and because of it Gabriel Borba should be expelled of the Institute of Architects. As it was said to me people approved the idea but another one came in my defense so enthusiastically that they changed idea. In fact I was not really expelled from the Institute so quick was the action. I didn’t see a thing because I was busy with something else. I was inscribing myself in a contest of Industrial Design in which I won, later, the first prize.

The project Jaula da Anta –Anta’s Cage- had three versions. The first one, presented at the Congress, looked like a conventional project of architecture, in blueprint. The second one, presented at the Bienal de Paris was quite the same, a little larger, with texts in French and a better drawing. The third one was a offset printing with collage, small format, to be published in the album TRÄMA, released by the General Cooperative for Art Subject

The project is amazing and should be seen. It made sense those days because it worked as a funny provocation against the bunch of serious people with their vanity and so. Nowadays it works because it is sympathetic. The funny thing is that an American curator asked the Jaula da Anta because it is blueprint. I hope this is not its only quality.