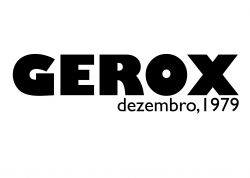 On a visit to Millôr Fernandes I saw, delighted, his drawings and the way he made them.

Scribbles, collages and awkward figures, once printed in newspapers and magazines, were used for the meticulously studied expressive purpose. Scribbles of multiple-tips, colors and doodles arranged with a varied mix of collage material, once printed, acquired amazingly vibrant homogeneity.

I thought about it for my participation in the Gerox exhibition, xerox prints that we were combining, to be presented in 1979 at Espaço Max Pochon, an inactive store, loaned to artists, on Avenida Faria Lima, in São Paulo.

The title Gerox , suggested by Julio Plaza, was stimulating for mixing xerox and engraving (gravura in portuguese). Many of us, not all, signed in "engraving mode", as arranged, dated and numbered each copy with n/infinite. The delusion of many, taking themselves seriously, believed that the xerox copy would introduce a contesting practice, more than an innovation, in the art circuit. A cut in the own throat: today, rare as they are, these copies have become disputed fetishes, far away from its original significance, just like the copies of the publications OnOf; Brazilian Art Recipe and others of its kind. In 2017, the Getty Foundation sponsored the Copy Art in Brazil Exhibition at the Gallery of the University of San Diego, California, USA, with much, if not all, of what was presented in Gerox and with a beautiful book/catalog signed by Erin Aldana and Erin Mayne. At best we collaborate with the system, expanding its horizon with ideas born from our concerns.

It was a time when the practice of forming groups thrived, through engagement, through the search for facilities or even the simple be together.

We have been using, for some time, these simple and fast copies, the xrox among them, as a way to find new and creative aspects of production, expression and distribution of what we did and thought. We were in principle in agreement with the distribution issue, but anyone who thinks that there was unanimity in the reasons is wrong. Unanimity was the animation.

Like so many others who traveled by various means of expression, I had already used the photocopy, in particular in Tachas of 1975.

Excited by the  exhibition Gerox, I took advantage of the study for A Mão da Moça não Sabe Costurar (The Hand of the Girl Does not Know how to Sew) and, aiming Millor, I worked on it with watercolor, aniline, hydrographic, pastel ... ursuing the possible texture and nuance of greys, extracted from the color when reproduced. I copied it in xerox without detaching the notebook sheet. Then I made two others with a purposeful mixture of materials and "homogenized" them by copying them in xerox on colored paper. They were Poeta (Poet) and Chuva (Rain).