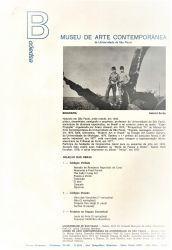 In 1977 Walter Zanini, director of the Museum of Contemporary Art at the University of São Paulo, invited me to occupy the newly created Espaço (Space) B. As he explained, it was a space that would house works of art that used little or none traditional resources . He also said that in front of the entrance, there would be Espaço (Space) A, destined to receive experimental works on traditional support and who would be there during my presentation would be Ubirajara Ribeiro. I asked him to postpone my opening for a few days to coincide with that of Ubirajara, whom I have always admired. The dates of April 25, 1977, for opening and May 15 for closing were fixed.

My work plan was delivered in the form of a two pages letter with a statment and work list. A new installation and allready done pieces that, in my opinion, offered an overview of what was going on in the statement.
On the wall flanked by the two entrances, I drew in pencil, large format, the figure of the hand that holds the lighted flame of plank nº 6 of the Pequeno Mobiliário Brasileiro (Small Brazilian Furniture) project, with a weak lamp superimposed, and its 6 planks fixed to the side wall on the left of those who entered and on the opposite wall, in front, two variations of the Jaula da Anta (Tapir's Cage) project. Both in blue print, calleing the set “Projects in the Conceptual Space” for the occasion.
In the center, two showcases with small formats, almost all on paper, one of them housing “Verbal Codes” and the other housing “Visual Codes”.

The Lady I long for