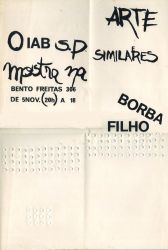 Art or Similar, 1971, was part of my undergraduate thesis at FAU USP, Faculty of Architecture and Urbanism of the University of São Paulo,TGI at the time, (IGW, Integrated Graduation Work). I had the guidance of Flávio Império, Architect, Set Designer, Costume Designer and Professor. We divided the work into three parts: a theoretical text where art and the artist were discussed; an exhibition of works done throughout 1969 and 1970 and the design of a residence.

Vilém Flusser, a philosopher and professor, visited the exhibition that was held in the Institute of Architects of Brazil, in São Paulo, and after seeing the whole thing without saying a single word, invited me to listen to his lecture at São Paulo Academy of Letters, near by. At the end of his lecture about Marxism, he said: "I am sorry, but I do not understand this subject very well and who really understands it is that young man sitting back there, from whom I have just seen an exhibition and whom I am inviting to be my assistant. Do you accept? I accepted. And I became a professor.

Mario Cascardo, a PhD student in Visual Arts at UFR, Federal University of Rio de Janeiro, whose theme is the Flusser-Flexor philosophical relationship, Flusser and Plastic Arts so to speak, comments on this passage: “I keep thinking that Flusser saw, in this things, a question related to, if I must summarize thus, remains and transparency (s). Transparency or diafaneity, to use the term he himself uses when talking about Mira's (Schendel) work. And "remains" about which he would think, too, of later texts on kitsch and post-history ".

The name Arte or Similar has its origin in two strands. The first was my disenchantment with what I was doing. I was bored with the painting and although I continued with some of them, half-heartedly, and without stopping to draw, I started the "jokes" that are seen in Art or Similar, where, incidentally, there are half-paintings, ... which I discussed with my advisor, a master painter in mastery and content who use to mock me, asking at every stacked or thrown thing we saw, whether in construction sites or in mechanical workshops or another, "was that you who did it?" The other strand was my father telling that in his office there where an employee who,
carrying papers in his hands, without knowing how to explain its content, would say "it's a process or similar." I thought it was appropriate.