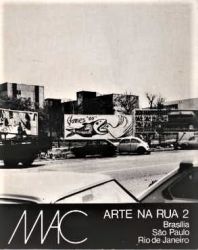 (Art in the Streets)

"The realization of the event Arte na Rua 2 (Art in the Streets), again as last year brought the controversial issue about the presence in the streets - desacralized space - of the production of the invited artist, poet or painter, engraver, graphic artist or cartoonist, a production usually displayed in galleries either/or museums, or in books and magazines ... "

"... the question that occurs to us is: after all, what is the place of art?"
Aracy Amaral, director of the USP Contemporary Art Museum
in catalog Arte na Rua 2 (excerpt)

Invited to participate in the Arte na Rua 2 (Art on the street) program, somewhat distant from what moves me, for me personal and intimate, I thought about refusing. After all, exposing on the street - I had already done it before - has always been outside the scope of my concerns.

But the insistence of the invitation pleased me since it put me in a good position among peers. I decided to participate with a message that satisfied both aspects: intimate solitude and participatory camaraderie.

It din't work. My skeptic NO registered in the huge panel was, for some, aggressive and, for others, one of those superficial conceptualisms, with little foundation.

If I had written NIHIL it would have a more sophisticated and less aggressive connotation, but it would be another thing witch I will still do.

It would be closer to what I sent to the XVI Bienal de São Paulo, 1981, moved by concern that was born at the time, as to be responding to calls with no flame, just for been present. Just to thicken a broth, good no doubt, but far from my taste. At the time it occurred to me to confes myself with a large format sheet in the center of which I wrote a column with the phrase "NOTHING TO DECLARE", in five different languages, one on each line. The sheet folded countless times, until becoming a square “cushion”, the size of the space occupied by the column of phrases. The closure mode of string tied with enormous exaggeration of turns, in two directions, lots of small value stamps, address, and glue all over it. It became an object to be sent by mail.

I visited the Biennal and was surprised by a space configured by 3 panels, with a picture of me with a pipe in my mouth in the middle of the central panel and the “thing” by the side. I am writing in 2020 and I cannot remember the details of this presentation other than the unexpected photo.