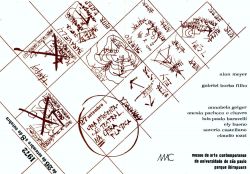 In 1972 it was in progress the play Gracias Señor of José Celso Martinez Correia presented at the Teatro Ruth Escobar.

It was a collective creation of the Teatro Oficina (workshop theater), a work of rupture, wielding the flag of experimental theater aspects. Later demonstrations began to use Te Ato (I act you in its many meanings) as a paradigm for Theater.

My student and friend Marcelo Kahns, from the Theater Department of ECA USP Escola de Comunicação e Arte da Universidade de São Paulo (School o Communication and Art of the University of São Paulo), for reasons that can be imagined, introduced me to the "troupe" with which I worked for some time, taking part in the laboratories, exercises and, I do not remember, some  presentation.

On one occasion I took a group of artists and intellectuals to one rehearsal, among them Vilém Flusser, of whom I was an assistant; Alan Meyer, now a psychoanalyst; Anésia Pacheco Chaves and Ely Bueno, artists and I do not remember if a few more. I remember that Flusser did not stay long, leaving irritated, exclaiming that you can not go back to the Greeks ...

In fact, the eight-hour show, presented in two parts on different days, was very aggressive, defying the assistance to engage in the mess under penalty of anathema. In one of the scenes, The Wall of Confrontation, if I remember right on the first day, the audience was challenged to step onto the stage and confront the characters now leaning against the back wall.

In the conversation that followed the experience of the group I invited, the question arose: "why things like that, so vital, are not done in fine arts?” (or more or less), Especially Anesia, endorsed by Ely Bueno. From there came the idea that resulted in a proposal for the MAC USP Museum of Contenporay Art Of the University of São Paulo, at the time directed by Walter Zanini, indicating  Alan Meyer, Helio Almeida - whom I hardly knew - and me to put it together. With Alan, in the studio loaned by Ely, we gathered paper works of six artists and discussed what relationship it was possible to establish between them. These artists were, besides Anesia and Ely,  Anabella Geiger, indicated by them and Baravelli; Tozzi; Savério Castelano; indicated by me.

I have no remembrance of how the conversation between Alan and me developed. What I do know is that I put together a chart that ended up being used as a poster and invitation to the event. There was a commentary on Baroque and contemporaneity, mentioning Velasquez, Tinguely ... and a concentric spatial scheme with the inner core; intermediate layer called mater; and outer layer termed exter. A critical glance located the artists in their respective layers, according to their most apparent vocation of spiritual intimacy (inter) to the vocation to present themselves in the concrete world with concrete things (exter), passing through a kind of expression of the process of materialization of the expressive form (mater). There should, of course, be equally expressive comments. I do not have the slightest idea of ​​what this means today. But I know that it has a lot to do with the early 1970s, with the repression that always frightened us, with assessments of the so-called bourgeois positions; with widespread and justified rebellion; with engagement in collective creations; with the formation of communities (this noun designated something very different from what it designates today); things like this.

There were more than 20 of these transparent double curtains and inside of them, one by one, I "enveloped" 3 paper works of each of the chosen artists. The exception was Anésia, who sent objects rather than paperwork.

The remaining transparent curtains received my images in Images of Urgency style (this name was born when Adriana Palma and I were analyzing this same project in 2012). This images were fixed to comment by transparency the paper works in exhibition and to make a role as personage among the actors that was to be invited to improvise within the environment.

In the ceiling of the exhibition space, between the curved wall of the Museum’s auditorium and that of “Space B” that no longer exists, I fixed slats arranged in a stellar format and on them was hung the set of transparent curtains, obeying the criteria set out in the chart I already mentioned.

I invited a theater group, the Teatro Novo (New Theater), formed and directed by Edelcio Mostaço, then my student at ECA USP, to make public improvisations in this now called Confrontation Environment - there were a lot of people watching. And Alan invited to present in another day the modern dance group of Maria Duschenes who worked the Laban method in which he was interested. There have also been other spontaneous presentations.

There was in the end a great misunderstanding: what was for the proponents an integration between artists, public and who knows what, seemed to them an aggression, forgotten that the origin of the proposal, Gracias Señor, were Wall of Confrontation .

Newspaper articles (at least one I dealt with) and letters and texts and attitudes ... tried to denigrate the event.

In 2020 Mario Cascardo, doctoral student in Visual Arts at UFR Federal University of Rio de Janeiro, interested in the visual arts approach of Vilém Flusse, of whom I was an assistant comment: “If, in your first exhibition (Arte or Similar), what if I saw on the floor (something indefinitely?) "things", later you start to bring drawings and - mixing the function of artist to that of curator and architect - works of other people - like Ely Bueno. I believe that Flusser saw in you, at that moment, a kind of a Marxist in existentializing "evolution" . Would it be? A Marxist who wants to criticize fetishization / commercialization and, at the same time, create an aesthetic environment, an experiential communication through sensitive creations. Artistic "declination of aura".

At the end of the period, the installation was dismantled, the works returned to the invited artists and the material, plastic with drawings and others is missing.

There are still some photos, some of them in the Museum archive and some with me.