A Formação do Artista 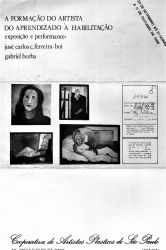 A Formação do Artista do Aprendizado à Habilitação

The Artist Training from Learning to Qualification

Boi was one of my constant interlocutors. There was always a shrewd remark about what we do, art they say, and what was done in its name. I remember, with a bad memory - I will not be able to name names - his description, of a arrangement between a German artist and an English artist, proposing a joint exhibition in which one sent his pieces to the other for interference or something like that...

thought of something similar that came out different.
At that time, I was interested in some subjects that was discussed at the Escola Freudiana de São Paulo (Freudian School of São Paulo) that I attended, one of them being the training of the psychoanalyst.

Among Lacanians, the psychoanalyst assumes himself when he feels prepared, much like what happens with the artist. It is not the , the school or the degree that does it, but himself with the help of the other who appoints it.
Our joint exposure came out of the mutual recognition of the Other. The Other of the Self.

A text from Boi on the poster of our joint exhibition helps to clarify. And it indicates the choice we made of what to present, One choosing something of the other.

It touched to me the reissue of PGU 666 of 1972 - which became known as Artista Profissional (Professional Artist) - which resulted in an offset edition of the Cooperativa de Artistas Plásticos de São Paulo (São Paulo Visual Artists Cooperative), at the initiative of Boi himself. To this edition, a form was added to be filled in by the interested party, who qualified himself as an artist according to certains requirements.