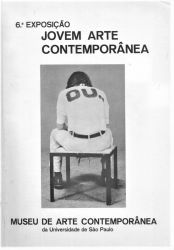 The Museum of Contemporary Art of the University of São Paulo promoted in 1972, an art salon without any kind of selection. A space plan was produced dividing it into small lots of various sizes and shapes. A draw distributed them among the many present on the condition that they occupy them according to a plan to be elaborated and their progress declared by filling out forms printed on the back of the poster, being part of the rule exchanges, purchases and sales of lots.
Not being drawn, I received in donation a lot purchased by Radha Abramo, art critic and curator, from someone who passed by, a curious who had been drawn.
My participation consisted of requesting documents of the event, sales receipt, certificate of donation and authorization of the director of the house and taking these documents to other bureaucratic organs requesting certifications of various kinds, which, in turn, required new documents such as Residents Certificate, Certificate of Moral Suitability and others.
To this I added titles, stamps and other elements, many of them counterfeit with LetraSet, to allow me to enter another bureaucratic office. The last one I got, through slight forgery, was a card that named me Professional Artist.
All these unrealistic documents were put together in a bureaucratic briefcase, ordered according to Bertold Brecht's The Exception and Rule. Ten copies of photocopy edition were taken