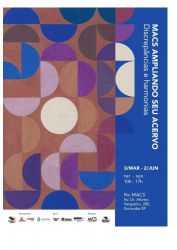 As every year, we started our 2017 program by exhibiting works that were donated in the previous year and that remained unpublished. We made a selection of 12 artists accentuating language differences, but showing harmonies between the discrepancies.
One of the works presented is already featured in the MACS collection, it is the geometric work of Antônio Maluf, a pioneer in it's time, produced in the early 1950s and, in which, the title itself explains its constructive process: “Twenty possibilities for two half points articulate by a point, before forming a point ”.
Other works contributed to the development of conceptual art, such as those by Bené Fonteles and Gabriel Borba, carried out in the 1970s / 80s. We also include recent works that explore new supports and new language possibilities, such as the works of Cristina Barroso, Cristina Schleder, Jaime Prades, Regina Johas and Renata Barros. The already expressive MACS photo collection has been enriched by Claus Mitteldorf's innovative essays.
Also worthy of note are donations by Sergio Fingermann and Sergio Lucena, two masters of current Brazilian painting, and the magnificent album of woodcuts “O meu e o seu” (1967) by Antônio Henrique Amaral, which we partially exhibited.
Fabio Magalhães